What Cloud Services Enterprise VP/CEO should look for? Why They Should use this 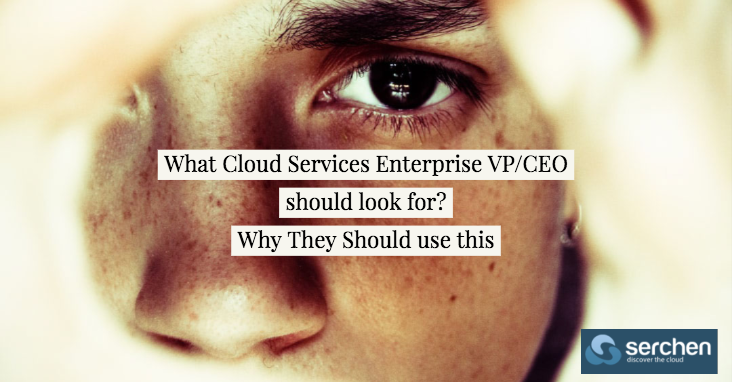 Why cloud computing strategy is important?

According to Gartner, only two-thirds of enterprises sport a documented cloud strategy, because, for a good many of them, the idea of cloud is still so perplexing.

However, cloud strategy will become the dominant choice for many enterprises in the next decade, and they will move on to refactoring many of their existing applications.

With a cloud strategy, you can be definitive about the outcome of your business goals, but you need to understand the differences faces of cloud computing. Enterprises are slowly migrating from on-premise data centers to the public cloud.

A broad range of enterprises is attracted by the benefits extended by cloud computing because when employed in the right manner, the benefits to be reaped are aplenty. Business groups have enjoyed faster time to market, decreased capital expenditure and operational expenditure, better speed and agility and incredible IT deliverance.

Cloud services provide massive transformation and there is a complete paradigm shift from the existing infrastructure and IT strategy to resources provided by the cloud provider.

Organizations often try hard to maximize their already existing infrastructure as they have made significant investments in their datacenter. The idea of buying more hardware to enjoy the benefits of the cloud can be emotionally and physically debilitating for them.

However, the good news is that enterprises can make use of the existing hardware and rebuild their own cloud infrastructure successfully. Even after the migration to the cloud is completed, it is possible for the enterprises to leverage existing computing, storage, networking and virtualization resources

So what should cloud service enterprise CEOs and VPs be aware of when they plan a transition?

Attractive as it may sound, migration to the cloud  It is a massive transformation. In certain cases, the IT team may need to develop additional skills that need to think of “pooled resources” and not just “individual resources”.

1. The percentage of IT budget they can save

The budget is probably the first thing that concerns the stakeholders and the VP of a company. According to a study by Microsoft, only about 11% of a company’s budget is used for developing new applications and much of the budget is allocated for maintaining and updating the infrastructure.

This leaves the enterprise with very little resources for employees, the devices they use, the documents they maintain and so on.

2. Increasing the productivity to an all-time high

For certain jobs, professionals have to work outside their office, on their job sites. They might need instant access to blueprints, documents, files, cost estimates, photos, videos, and similar content.

It is imperative to have cloud-based content management and system, so they can easily access whatever they need through applications on their mobile devices. As long as the employee has access to an internet-connected device, they have access to the files as well. – Read more

Read More »
July 1, 2022
PrevPreviousIt’s Time to Assess Your Cloud Security & Maturity: Here’s How
NextWhy virtually everything relies on cloud technology in 2019Next