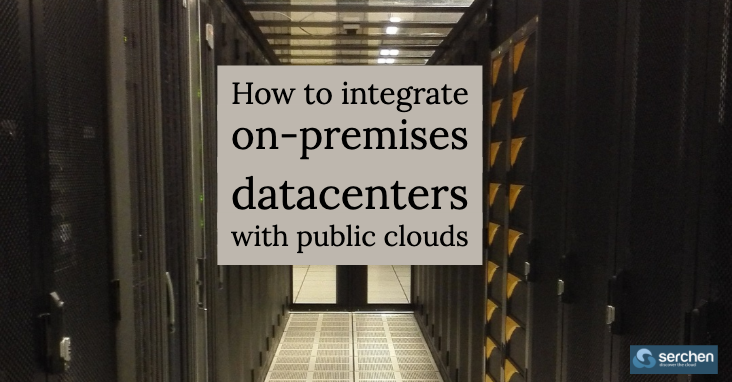 The integration between on-premises datacenters and one or more public clouds is what we now call a hybrid cloud setup.

As opposed to multicloud, which involves multiple public clouds without any on-premises datacenters infrastructure in the mix, hybrid clouds offer its users the ability to keep sensitive or “high-priority” data on-premises. Hybrid cloud setups are becoming increasingly popular in both the finance and health-care sectors as both these sectors have quite specific regulations around security and privacy, as well as zero tolerance for latency issues. Imagine a lagging computer on a stock market floor or in an emergency room of a hospital. Sounds scary, but it’s never going to happen because there are regulations in place that keep important stuff like that on-premises. That doesn’t mean that banks and hospitals don’t want all that other good stuff that comes from the cloud though, like GPU instances or AI and deep-learning-powered services that recognize speech and images.

Cost is also a major factor that drives organizations toward a hybrid setup, especially when variable workloads are involved. A hybrid setup lets you use your regular on-premises datacenters infrastructure to handle normal workloads and switch to public clouds for “cloud bursts.” This is no easy feat, however, and is certainly more complicated than running a multicloud setup. This is because the different cloud and on-premises resources not only use different APIs and management interfaces but are often based on completely different technologies that were never meant to integrate with each other. In fact, according to a research study by DataCenterKnowledge, one of the most common problems with hybrid cloud adoption is getting legacy applications to work alongside modern cloud-native ones. Patching the two together always comes at a performance cost and when we’re talking about business-critical applications, that isn’t really an option for organizations that have thousands of customers depending on them.

While there are a number of advantages to this hybrid model such as flexible usage-based pricing models, almost zero setup cost, and on-demand access to virtually unlimited resources, getting it all to work together is still a work in progress. This means that even though a large number of organizations have adopted this setup and are using it efficiently, there isn’t really a one-size-fits-all or “foolproof” solution to the problem yet. Several platforms help you get there, however, and even some new ones that are quite promising with regards to supporting a truly hybrid infrastructure. This means supporting as many integration scenarios as possible since hybrid clouds typically encompass quite an assortment of hardware, operating systems, and APIs. This is where the platforms come in and try to make it all easier to manage, preferably with a single control pane for both your on-premises datacenters and your public clouds.

Outposts was released by Amazon Web Services in November 2018 as part of a major push toward making the hybrid cloud feasible. As opposed to making software that’s compatible with your on-premises equipment, AWS goes old-school here and gives you new on-premises equipment that’s compatible with its cloud. These are delivered to your datacenters in the form of preconfigured racks where AWS services can be run just as they would in the cloud. In addition to being fully managed by AWS and able to run legacy apps in a cloud-native manner, Outposts also allows you to keep AWS services like compute and storage on-premises. Though this method works well since you’re effectively swapping out all your hardware and software for AWS compatible stuff, a complete datacenter “lock-in” isn’t a tempting offer for everyone. Since a big part of what the hybrid cloud represents is freedom and options, buying hardware managed by AWS limits both. – Read more