Adobe gets its company, snaring Marketo for $4.75 billion 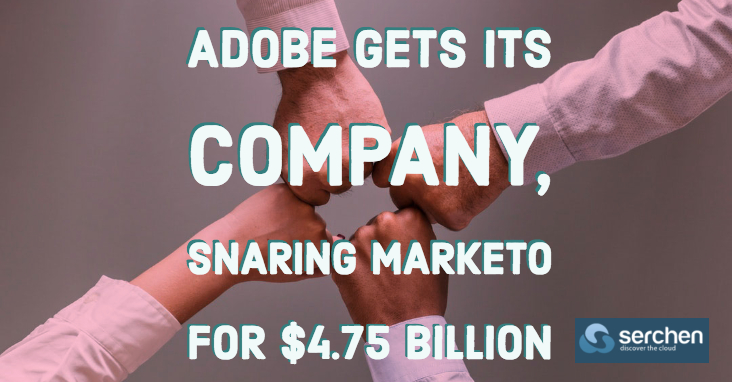 A week ago rumors were flying that Adobe would be buying Marketo, and lo and behold it announced today that it was acquiring the marketing automation company for $4.75 billion.

It was a pretty nice return for Vista Equity partners, which purchased Marketo in May 2016 for $1.8 billion in cash. They held onto it for two years and hauled in a hefty $2.95 billion in profit.

We published a story last week, speculating that such a deal would make sense for Adobe, which just bought Magento in May for $1.6 billion. The deal gives Adobe a strong position in enterprise marketing as it competes with Salesforce, Microsoft, Oracle and SAP. Put together with Magento, it gives them marketing and ecommerce, and all it cost was over $6 billion to get there.

“The acquisition of Marketo widens Adobe’s lead in customer experience across B2C and B2B and puts Adobe Experience Cloud at the heart of all marketing,” Brad Rencher, executive vice president and general manager, Digital Experience at Adobe said in a statement.

Ray Wang, principal analyst and founder at Constellation Research sees it as a way for Adobe to compete harder with Salesforce in this space. “If Adobe takes a stand on Marketo, it means they are serious about B2B and furthering the Microsoft-Adobe vs Salesforce-Google battle ahead,” he told TechCrunch. He’s referring to the deepening relationships between these companies.

Brent Leary, senior analyst and founder at CRM Essentials agrees, seeing Microsoft as also getting positive results from this deal. “This is not only a big deal for Adobe, but another potential winner with this one is Microsoft due to the two companies growing partnership,” he said.

Adobe reported its earnings last Thursday announcing $2.29 billion for the third quarter, which represented a 24 percent year over year increase and a new record for the company. While Adobe is well on its way to being a $10 billion company, the majority of its income continues to come from Creative Cloud, which includes Photoshop, InDesign and Illustrator, among other Adobe software stalwarts.

But for a long time, the company has wanted to be much more than a creative software company. It’s wanted a piece of the enterprise marketing pie. Up until now, that part of the company, which includes marketing and analytics software, has lagged well behind the Creative Cloud business. In its last report, Digital Experience revenue, which is where Adobe counts this revenue represented $614 million of total revenue. While it continues to grow, up 21 percent year over year, there is much greater potential here for more. – Read More